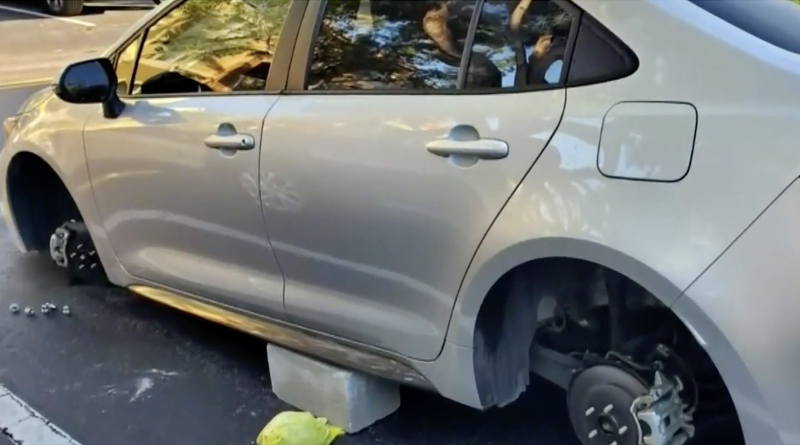 DORAL, FL – Neighbors in Palms of Doral community at 56 Street and 112 Avenue are concerned for the amount of auto thefts that have happened recently.

Reports are linked with the theft of tires, as it was the case with Juan Carlos Rutilo who found his Toyota Corolla without its four tires on Saturday morning around 8:30 a.m.

“The thief left my car with only two blocks for support underneath”, said Juan Carlos this morning in an interview with Doral Family Journal in which he also confirmed the community woke up today, Wednesday, with two more auto thefts.

“When I was leaving for work, I found out two more neighbors were victims of robbery. Both cars were also Toyota Corolla and two tires were removed from each”, said the Palms resident.

The Doral Police Department learned about his case as he made the report just minutes after the incident and there is an investigation on process, although the lack of security cameras in the area is making it more difficult.

About this, Juan Carlos talked to the administration yesterday and hasn’t been able to get a solid response.

“I went to the office on Monday, but the manager was not available. On Tuesday, I requested security cameras, because we are very concerned for our safety. This is a family oriented community where there are children”, said Juan Carlos.

The manager, who reports for Lincoln Property, the company in charge of managing Palms of Doral, said she already passed a budget that includes security cameras and is waiting for approval from the main office.

“She said that six months ago when four auto thefts were reported in the community under the same circumstances, the office did not approve putting security cameras due to high costs”, explained Rutilo.

For now, his budget will be the one suffering the consequences as the total cost for the four tires removed is of $3,080. He will have to pay 1,000 from his own pocket. The administration said they might consider helping with the expenses as an exception.

One of the arguments of Palms of Doral is that there is a clause in all contracts that specifies their lack of responsibility with everything happening outside the units.

Yet, there are no cameras or well-illuminated parking spots. “My car is next to a light pole, but there are many trees covering it”.

“All residents want these cameras to be installed and we are putting pressure for this to happen. Naturally, without them, burglars feel free to act as they please. We don’t know if auto thefts are made by other residents or visitors”.

“The administration should offer some kind of guarantee because that is what we pay for. My wife is very concerned, we have a little kid and we don’t know if this will continue happening”, said another neighbor for Univision 23.

The recommendations of the Doral Police Department highlight that you can reduce the probability of being a victim of car theft or vandalism if you park in a well-lighted area, do not leave valuables in plain sight and close all the doors in your car.

Remember that in order to report any incident or suspicious person, you can contact the Doral Police Department via telephone at 305.593.6699 or send them an email at info@doralpd.com