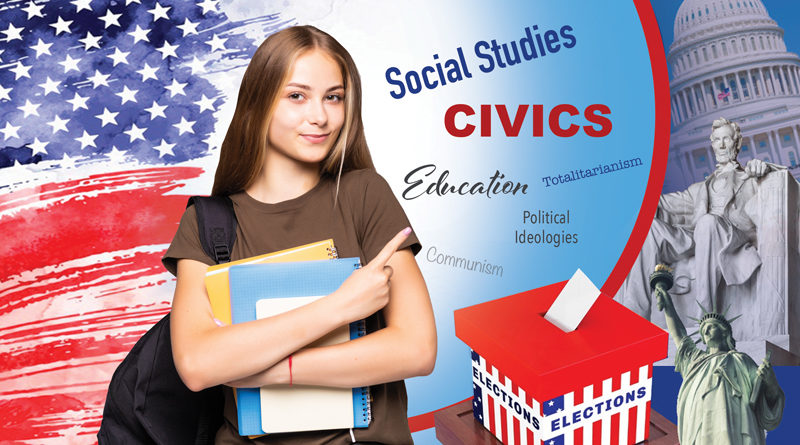 House Bill 5 (HB5) was signed into law by Governor Ron DeSantis, to revise the Social Studies requirements for high school graduation in the State, requiring from the Department of Education (DOE) a development of a civics curriculum to be incorporated “as part of regular school work in kindergarten through grade 12”. The new law will be effective July 1st, 2021.

Within the requirements for graduation, the new law details that high school students must complete one-half credit in United States Government that includes “a comparative discussion of political ideologies, such as communism and totalitarianism, that conflict with the principles of freedom and democracy essential to the founding principles of the United States” F.S 1003.4282 (3)(d).

Two other related pieces of legislation were signed along HB5. Those bills include revisions to graduation requirements and standardized assessments, and provisions for the protection of viewpoint diversity within the Florida College System, among other details geared towards the continued improvement on the quality of education in the State.

The dire state of civics and government education in America

An independent national survey amidst college students and recent graduates, commissioned by the American Council of Trustees and Alumni (ACTA), and conducted by the University of Chicago (UC) in 2019, showed alarming statistics on the state of civics and government education in America. For instance, only 18% of colleges require students to take foundational courses in U.S. government or history, and 60% of respondents did not know basic information such as the three branches of the government system, term length of US Congress Senators and Representatives or who the current Chief Justice is.

The questions on the survey are similar to those on the test that immigrants take when applying for American Citizenship; if they fail the answers to those questions they are not granted citizenship. Unfortunately, many of those born and raised in this land of opportunity take their birthright citizenship for granted and are oblivious of the answers to those basics questions of civics and American History. That is outrageous, unfortunate, and dangerous for the future of the country. What kind of leaders will they choose and who would guide the country if people do not understand how the government works or know about history? The fix for that conundrum is on enhancing civics and history education.

The “Portraits of Patriotism” Act

Florida is taking action to solve the civics knowledge gaps of its students with the three laws recently passed.

House Bill 5 requires that the integrated curriculum for public school students from kindergarten through 12th grade focuses on the development of civic responsibility and knowledge. It also establishes the “Portraits in Patriotism Act”, requiring the compilation and curation by the DOE of oral history resources and personal stories of diverse individuals who demonstrate “civic-minded qualities, including first-person accounts of victims of other nations’ governing philosophies” who can compare those philosophies with those of the US. South Florida community is abundant on those epic stories that deserve to be shared with future generations.

Another addition established on the bill is the inclusion, within the US Government course required to earn the high school diploma, of a comparative discussion of political ideologies that conflict with the principles of freedom and democracy of the US, such as communism and totalitarianism, which are the foundations for other governments in the world, especially in Latin America. Those governments are causing suffering and poverty on their population and impacting their neighboring countries as well, hence the importance of discussing and educating students about the theory of those ideologies. This bill passed unanimously in the legislature.

Modifications to graduation requirements, free SAT for juniors and a pilot educational option

The other two bills signed into law related to education in Florida were Senate Bill 1108 and House Bill 233.

SB 1108 establishes a laundry list of requirements related to education such as SAT or ACT free of charge for every student in 11th grade; a civic literacy course and assessment for post-secondary education; paper-based math and English standardized assessments in 3rd to 6th grade; the creation of a character development curriculum for 11th and 12th graders that includes instruction on the voting process;  and authorizing the DOE to hold intellectual property of certain developed materials.

A highlight on the bill is the creation of the “Innovative Blended Learning and Real-Time Student Assessment Pilot Program, which involves the combination of in-person and remote students in the same classroom environment.”

SB233 on the other hand establishes requirements to protect intellectual freedom and viewpoint diversity at Florida College System institutions and state universities requires annual assessment of that protection and prohibit shielding students, faculty or staff from protected free speech, to ensure “postsecondary students will be shown diverse ideas and opinions, including those that they may disagree with or find uncomfortable.”

Out of the three education bills passed, only SB233 had opposition in both the Senate and the House. The other two passed unanimously.

If you would like to test your US Government and Civics knowledge you can take a sample of the ACTA/UC civics survey here https://www.goacta.org/resource/americas-knowledge-crisis/

2 thoughts on “Bill Passed to Strengthen Civics Education in Florida”